Since the launch of the website Twitch in 2011, streaming and the viewing of streams has risen to dizzying heights of popularity.

Every week MILLIONS of people from all over the world either upload their streams, live stream or watch the streams from their favourite gamers. Some - Ninja for example - have managed to make a very lucrative living off becoming a professional streamer. But at what cost? 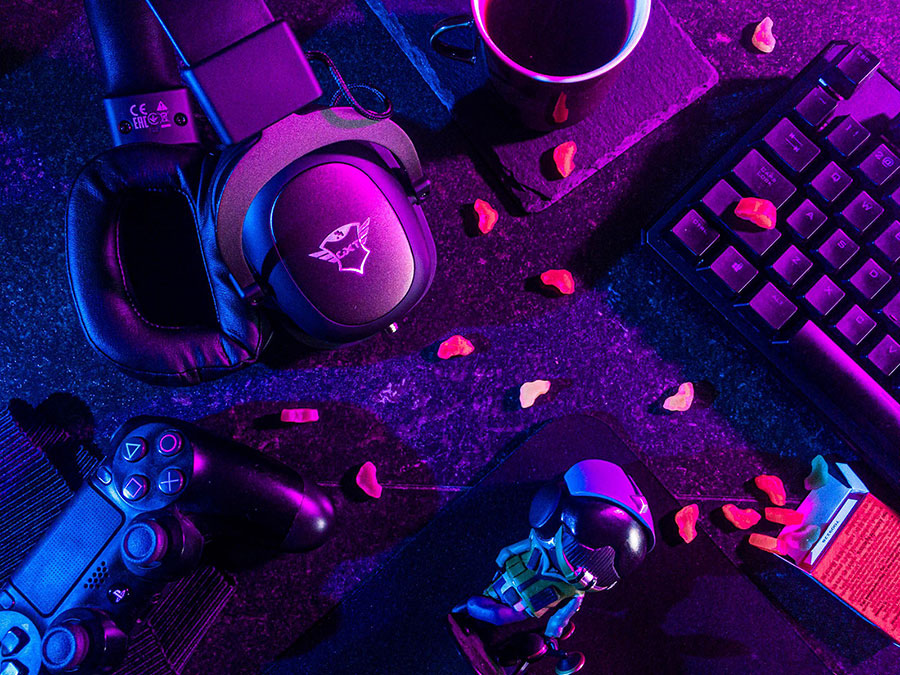 To shine a light on the matter we have analysed Twitch data to calculate the impact Twitch viewers and game streamers are having on the planet - and which games are the most detrimental.

Video game stream viewers are responsible for OVER 919k TONS of CO2 a year... and these are the games responsible

As there are more stream viewers than actual streamers on Twitch, it should come as no surprise that they are accountable for producing the most amount of CO2.

Over the course of one year, 1.7m viewers spent over 896 BILLION hours watching streams on Twitch. When an average of the streaming energy use of popular plug-in consoles plus PC is used (0.07kWh), this equates to a massive 59.7bn kWh (59.7k gWh) per year, just on watching video game streams.

But what about the impact...

This level of energy consumption produces a lot of emissions. Viewers on Twitch are responsible for emitting 919m kgs (919k tons) of carbon dioxide per year.

In fact, it would take over 43.7million fully grown trees a year to absorb that amount of CO2. That is enough trees to fill 35,110 football pitches!

These are the 25 biggest energy consuming game streams being watched on Twitch, over the past 12 months 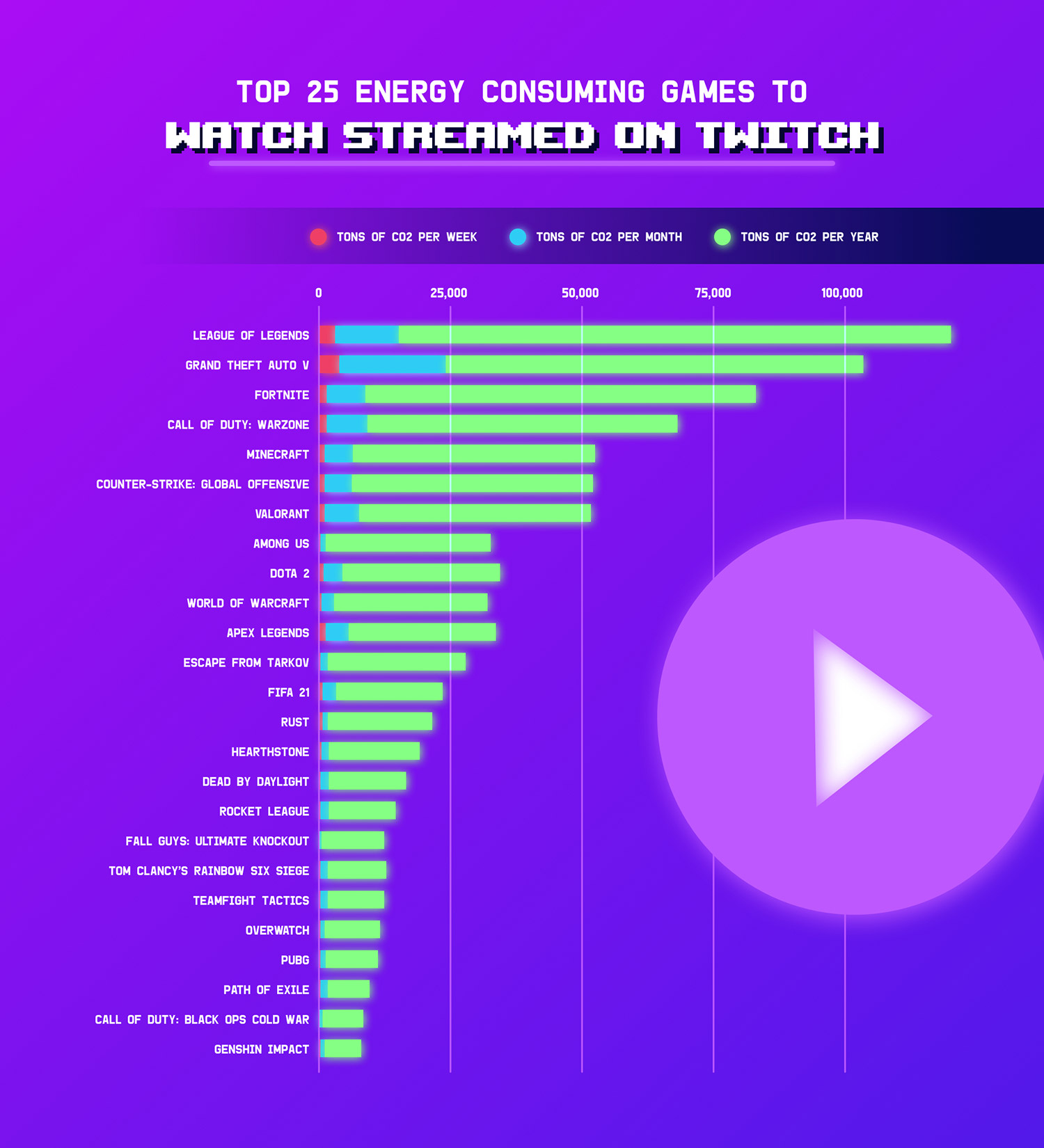 The streamers, although not as much as their viewers, still produce a large amount of CO2 emissions.

During the past 12 months, over 28.75m streamers on Twitch have spent 36.16 BILLION hours of stream time on the platform. Based on the average energy used for gameplay across the popular plug in consoles and PC (0.13kWh), this adds up to a 4.79 million kWh of energy used per year, resulting in 134 million kg CO2.

This would take 6.4m trees a year to absorb, filling 5.1k football pitches.

So what is this equal to? It may be a drop in the ocean, or the Ozone, compared to the viewers’ emissions but this amount of energy would still be enough to power Gibraltar for 24 years or the Falkland Islands for 262 years - just from one year of video game streaming.

These are the 25 biggest energy consuming games being streamed by gamers on Twitch, over the past 12 months 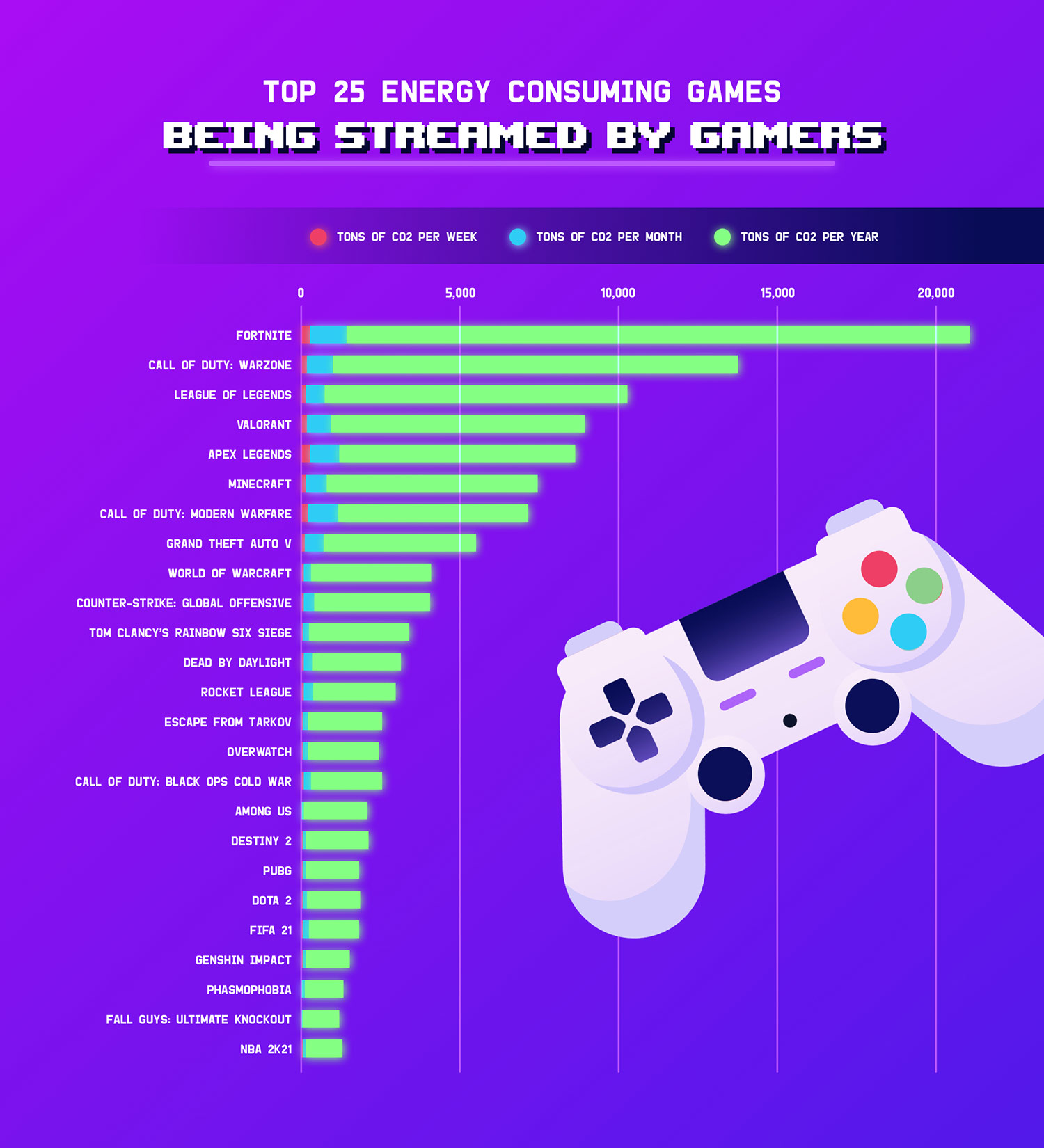 Although these figures are only based on one platform, Twitch, and do not include the likes of YouTube and other platforms used for game streaming, the total amount of energy used and CO2 produced by streamers on the platform is shocking. 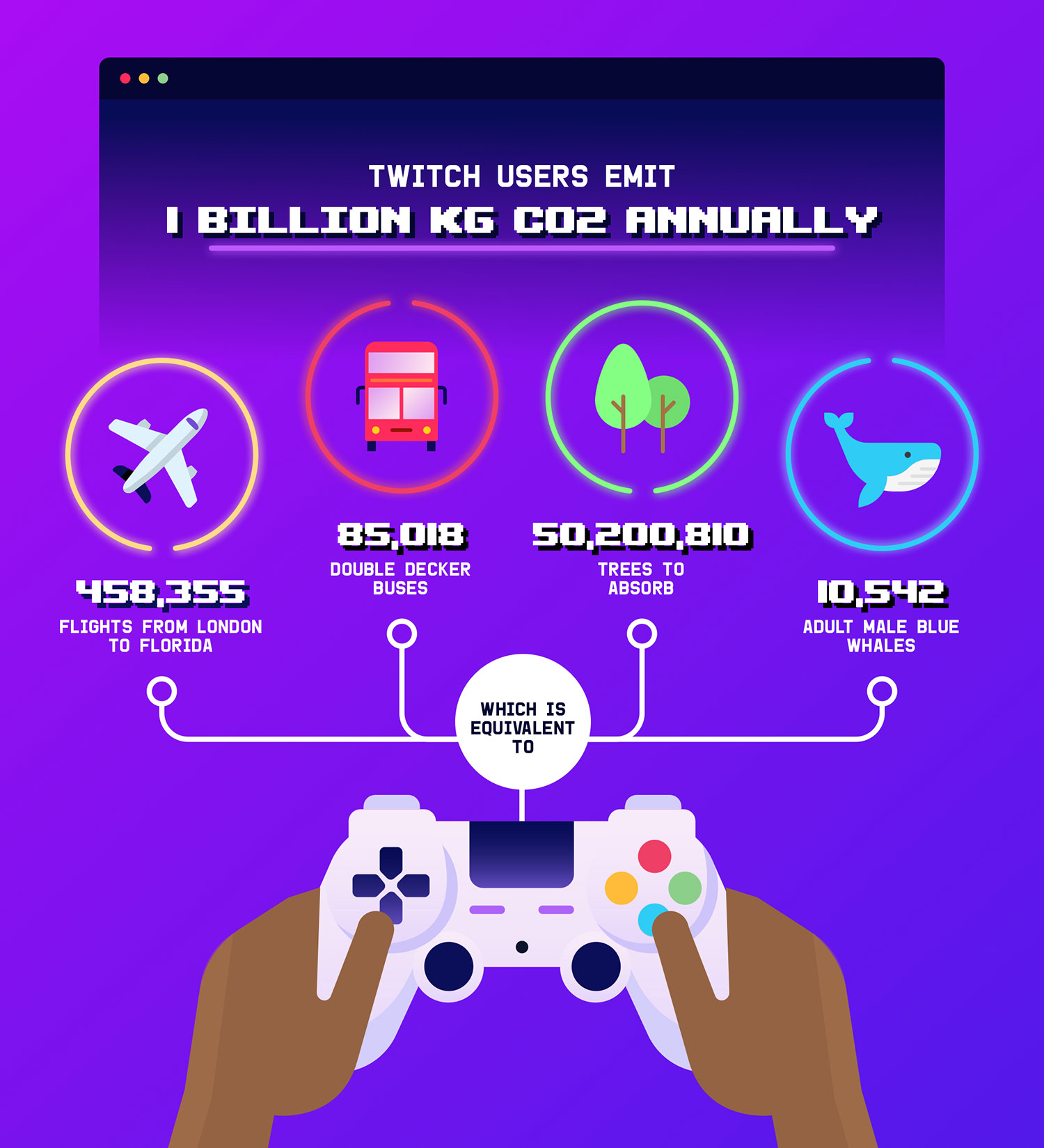 In order to negate the impact their users are having on the environment, Twitch would have to plant 50.2 MILLION trees a year, an amount which would fill 40.2k football pitches (or 287 km2).

Too hard to imagine? 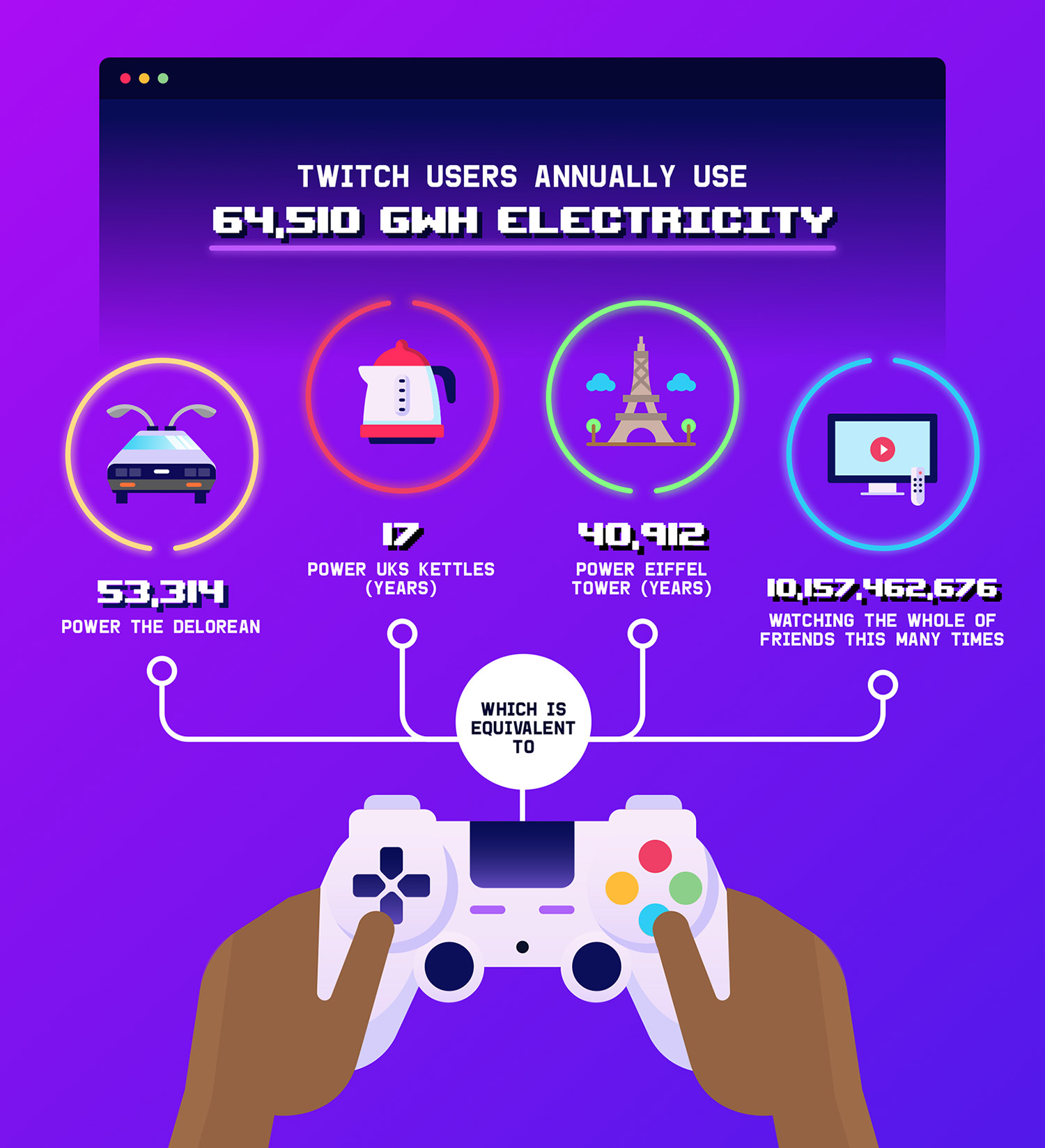 Well that electricity is enough to boil all the UK’s kettles four times a day (the UK average) for 17 YEARS! It is also enough energy to light the 20,000 bulbs on the Eiffel tower for over 40,000 YEARS or even watch every Friends series over 10 BILLION times.

As we can see those playing the games and creating the streams use a lot less energy than those viewing, so we suggest you get comfy on a gaming bean bag and play for yourself, rather than watching others do it!

We used data from Twitch Tracker and Sully Gnome to collect the most streamed and viewed games per week, month and year on Twitch.

We then worked out the average streaming and game play energy consumption across Xbox One, PS4, Xbox Series X, PS5, PC, Monitor and TVs to give average kWh. This figure was used to work out the energy consumption of the games by multiplying the kWh figure by hours viewed/streamed per week, month and year.